The Bills are preparing to host the Cardinals Sunday in Orchard Park.  It is a make or break game for Buffalo and embattled coach Rex Ryan.  Challenges abound with Sammy Watkins questionable and Marcell Dareus out on suspension.  Arizona is coming off a 40 – 7 blowout of Tampa Bay.  Quarterback Carson Palmer still does not write off the Bills chances.  The Cardinals are arguably the best team in the league and tough on the road, winning 7 away games last year.  Anthony Lynn will debut as Buffalo offensive coordinator.  THE SEASON WILL BE WON OR LOST TOMORROW AT HOME.  ALL EYES WILL BE ON RYAN AND THE PEGULAS WHO WILL DETERMINE HIS FATE.

Sammy Watkins is doubtful for the Cardinals game.  The star wide receiver sat out a third straight day of practice.  He is dealing with a surgically repaired foot injury.  This is all Buffalo needs down 0 – 2 with the offense struggling.  STUNG BY A SERIOUS OF CRITICAL INJURIES THE BILLS ARE LIMPING AMID DESPERATION.  WATKINS IS NEEDED BACK IN UNIFORM IF THERE BE ANY CHANCE OF TURNING THINGS AROUND.

Rob Ryan May Be Next

Rob Ryan may be the next to go.  The Bills assistant head coach in charge of defense and brother of Rex Ryan is hanging by a thread.  The abysmal performance of the defense last week, giving up over 400 yards, makes the case for him to exit.  The firing of offensive coordinator Greg Roman should be the first of several coaching changes.  IN AN EFFORT TO SAVE HIMSELF REX RYAN MAY HAVE TO SACRIFICE BROTHER ROB TO APPEASE THE PEGULAS.

Pegulas Talked To Players in Advance of Roman Firing

Terry and Kim Pegula talked to players in advance of the Greg Roman firing.  The Bills owners conferred with key members of the offense without Rex Ryan present.  Pegula later tweeted the Associated Press that it was Ryan’s decision to fire Roman.  He added that Ryan is in charge of the team and staff.  Surely the Pegulas are to be lauded for reaching out to the players.  They genuinely are trying to make this work.  We can only hope that new offensive coordinator Anthony Lynn will turn things around.  He surely has a daunting task.

More of the Same at One Bills Drive

It’s more of the same at One Bills Drive.  The season is realistically over just as it got started.  Owners Terry and Kim Pegula, while well intentioned, are clueless as to running professional sports franchises.  They have stumbled with both the Bills and Sabres.  The healing must begin with a purge of the head coach and general manager.  Show Ryan and Whaley the exits.  They have repeatedly blundered with personnel decisions.  Countless millions have been squandered on bad coaching and player deals.  The Pegulas must find an experienced franchise pro and let him reorganize.  2016 is already history.  Let there be hope for the future.

Rex Ryan’s days in Buffalo are numbered.  The Bills coach is reeling from the devastating 0 – 2 start to the regular season.  The prospect of making the playoffs is dim.  Fans hardened by the 16 year playoff drought will be clamoring for his head.  His tough talking bluster will not save the day.  THE PEGULAS WILL CAVE IN TO FAN DEMANDS AND REMOVE RYAN PROBABLY BEFORE THE END OF THE YEAR.  DOUG WHALEY SHOULD BE NERVOUS FOR HIS OWN JOB.  IT’S BACK TO THE DRAWING BOARD IN BUFFALO.

A Team in Disarray

The Bills are a team in disarray.  The firing of offensive coordinator Greg Roman after just 2 games reveals the inner turmoil.  Both management and coaches are thrashing around looking for solutions.  Rex Ryan’s job and Terry Pegula’s credibility hang in the balance.  BUFFALO FANS DESERVE BETTER THAN THIS NATIONAL HUMILIATION.  THE FIX STARTS AT THE TOP, AND OWNER AND COACH MUST GET THEIR ACT TOGETHER TO SALVAGE THE SEASON. 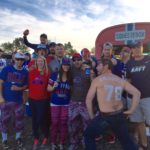 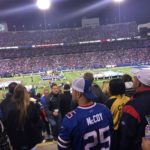 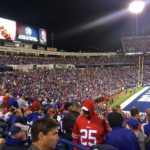 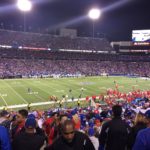 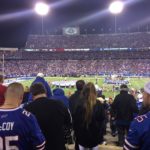 The Bills have fallen 0 – 2 with last night’s 37 – 31 loss to the Jets.  The gravity of the debacle is underscored by the 492 yards Buffalo gave up to a mediocre team.  Clearly Rex Ryan’s job hangs in the balance.  With upcoming contests against Arizona and New England, the prospect of an 0 – 4 start is real. THE BILLS NEED TO REGROUP AND BELIEVE IN THEMSELVES.  UNLESS RYAN TURNS THINGS AROUND HIS DAYS ARE NUMBERED.  BUFFALO’S SEASON MAY BE OVER JUST AS IT IS BEGINNING.

Will Rex Ryan Be Sacked

After the dismal performance against Baltimore, will Rex Ryan be sacked?  He clearly is in danger of losing his job if he can not turn things around.  The high priced offense is struggling and shows little hint of improving.  Owners Terry and Kim Pegula did not spend over a billion dollars for the franchise to remain in the cellar of the NFL.  UNLESS RYAN GETS HIS TEAM ON TRACK HE WILL BE SHOWN THE EXITS, POSSIBLY BEFORE THE END OF THE SEASON.

The Bills released free agent Glenn Gronkowski following the Ravens game.  He is the brother of New England star tight end Rob Gronkowski.  After a disappointing performance, he was replaced by veteran Jerome Felton.  BUFFALO SHOULD HAVE KEPT THE HOMETOWN FAVORITE.  IT WOULD HAVE BEEN A GREAT DIVISION RIVALRY TO HAVE 2 GRONKS IN THE AFC EAST.